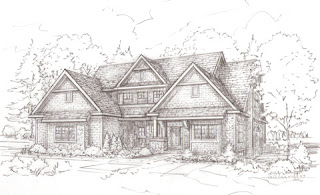 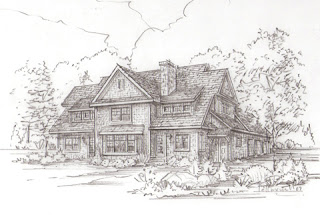 I think I agree with her now.
When we looked at the elevations, we were worried about the left facade. There wasn't a lot of interest other than the garage doors. But really, what can you do with a garage? But looking at it in perspective, I guess it doesn't look so bad after all.
Kerry did a great job with the roof lines. Overall, we love it.
One of our next steps is to get approval to start building. And that requires approvals from two different groups: the village's architectural review board, and the subdivision's architectural control committee. The developer who initially developed the subdivision runs the architectural control committee so we need to start there.
Both groups need to see construction plans and site plans. The developer also wants to see colors and materials for the exterior. So we had to go through a few steps. We bought a flat lot, and we want a partial exposure on the right side, so we have raise the house a couple feet above where the master grading plan for the subdivision suggests. Which meant in addition to a survey, we also had to get a grading plan. We need to show the location of sidewalks, retaining walls, patio and driveway, so we hired a landscape architect to do a landscape plan for us.
The architectural review board only meets once a month. Before we can go before the board, we have to get developer approval. I tried to get everything done prior to the October meeting, but that didn't happen. I now have everything but the landscaping plan, which is going through a second revision right now. Hopefully, I'll make it in time for the November meeting, but it looks like December might be a better bet.
With the state of the real estate market, and the bids we're getting from builders, the delay isn't a big deal: we may not start the house for a while anyway.
Posted by Unknown at 9:13 PM No comments: