The roofers showed up this morning and made good progress. They finished a good portion of the front side of the house: 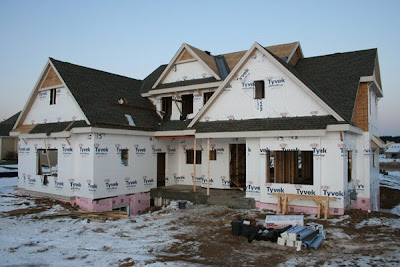 They said the could finish a roof in three to four days. Here's the section I think they'll start on Friday: 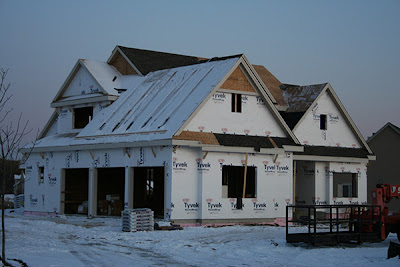 The weather forecast says flurries tomorrow night and Friday morning. Then snow showers on Sunday. Hopefully, the roofers can prioritize the valleys and tarp the ridges on Friday or Saturday to prevent a whole bunch more snow melting into the house.
Some positive progress on other trades. We had some plumbing supplies delivered today: the plumber starts, along with HVAC, on Monday. Pella called to confirm that windows would be delivered on Monday. I talked to the framer, and he'll have the crew at the site on Tuesday to install the windows.
I ordered finish lumber (2500 board feet of cherry) yesterday. They'll have it ready early next week. They called today to see if I had a forklift. There is one at the site, but the carpenter is taking it back tomorrow to use on their next job. So we either have to unload 3 pallets of lumber board by board, or they have to store it at the sawmill for a couple weeks until the carpenters bring the forklift back. Hopefully, they'll be able to store it.
Tomorrow is Thanksgiving. For those of you who won't be eating dinner at our house--Happy Thanksgiving! For the other 30 or 40 of you, I'll see you tomorrow.
Posted by Unknown at 11:08 PM No comments: