Almost done with the roof

Just a quick post this time. The framers have been working on the roof, soffits, and fascia yesterday and today. I spoke with one of the carpenters this morning, and he complained that they usually get soffits and fascia done in a day--but it will take more than three on our house. He said, "Most houses have either gables or hips. This one has both. Everywhere." Here's what he was talking about: 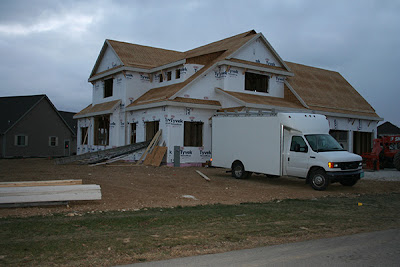 When working with on the design with Kerry, I mentioned that I didn't want any "pork chop" eaves.  We could have gone with a simple craftsman-style open eave. But that didn't seem right. So the solution he came up with was to "return" each side of the gable all the way to the other side of the gable. So in keeping with the shingle style we were influenced by, this house will have strong horizontal lines. I'm sure it was a hassle to design, but it's apparently even a bigger hassle to construct. I have to give the carpenters credit: I think it looks great!  But I'll have to be sure the roofer flashes everything correctly, or we'll have all kinds of leaks.
They also got the third gable up on the front of the house: 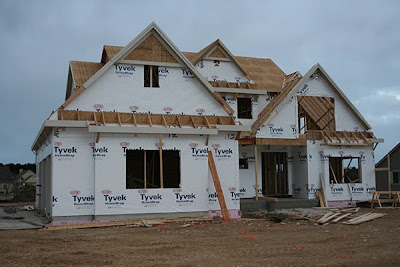 They still have a bunch of work to do on the front. They have to finish sheathing that last gable, and build the soffits and fascia for the whole front of the house. I'll try to get better pictures tomorrow and over the weekend when they're further along. They should be finished with sheathing, soffits, and fascia on Saturday. So the roofer can start on Monday. We have a slight chance of rain and snow on Monday, but the rest of the week looks good. Keep your fingers crossed.
Posted by Unknown at 11:01 PM No comments: