This week wasn't quite as busy--at least on the construction front (too bad I can't say the same thing about the market).  And we got some bad news: our first real delay. Everything was going ahead of schedule, until Monday. I talked with the framer, and he won't be able to start until the 27th of October. To be fair, that's about when he told me he could start a month ago.  So I've had to rework the schedule a bit. We should still have no problem pouring the basement and garage floor before it freezes, so it's not a real big deal. It also gives me time to make sure everything is ready before they start.
We passed the foundation inspection on Monday. The rest of the week...we waited for concrete to cure. On the bright side, it's been more than a week, and no cracks in the foundation yet--not even along the control joints.
I was hoping the excavators could make it on Thursday to install the sewer and water laterals and backfill the foundation. They had already scheduled me for Friday. Since it turns out that the steel guys couldn't make it until next week, good enough.
But then it rained all day Tuesday, so they requested that we reschedule it to next Monday so they could finish up the job they were on. That of course caused a domino effect. I had to reschedule the steel guys. They'll come in next Thursday. I delayed the plumber's start date for underground plumbing until next Wednesday.
I stopped by the site yesterday and, sure enough, there sat an excavator (a machine, not a person). They dropped the machine off yesterday, and finished everything up today. So they installed water and sewer laterals, backfilled, and spread "roadbase" (a mixture of very fine crushed limestone sand and bigger limestone gravel) on the driveway.  When they excavated, the guys had left exactly enough fill on the site to complete the backfill--they didn't have to truck any more fill in or out. So yet again, BPX exceeded my expectations.  If you're in the Milwaukee area, and you're looking for someone to do excavation or grading work, BPX should be your first call.
Here's our basement: 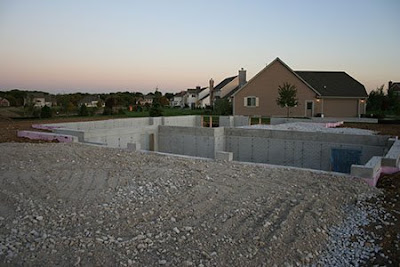 with the water & sewer laterals installed, 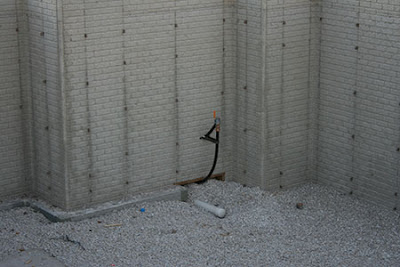 a single window well for the two windows on the south wall of the basement. This well will be about 30 feet long, 8 feet wide, and 3 to 4 feet deep (a great spot for playing hide and seek), 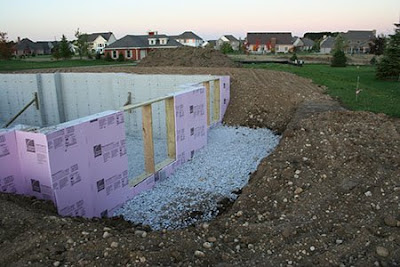 and a front porch filled with gravel: 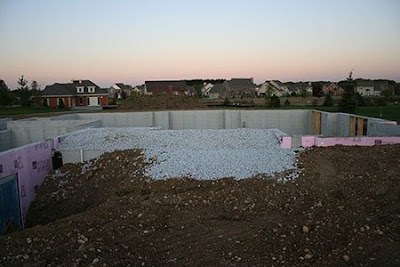 So next week, we'll be doing underground plumbing and setting steel beams. The week after, we'll set the Spancrete. And the week after that, we'll start framing.
Posted by Unknown at 10:27 PM No comments:

Megan, Zeke, and I spent part of the day on Saturday mining for rocks at the site.  It was a true family project. After surveying the job... 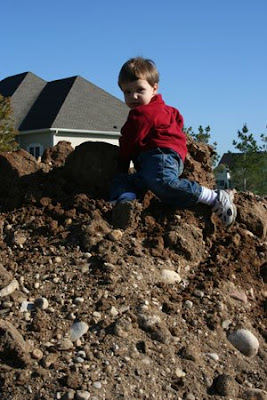 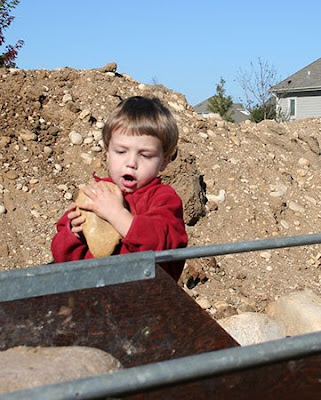 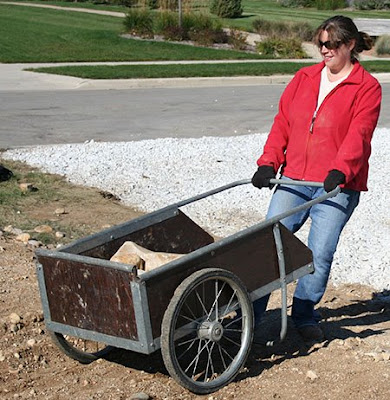 And I transported Zeke: 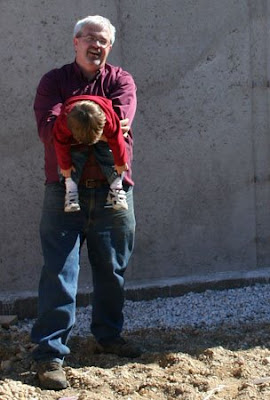 Now you can see how I'll save so much money on the project.
Posted by Unknown at 9:48 PM 1 comment: