The posts are getting more frequent. That's because we're starting to make more progress. Hopefully, it keeps on coming at this pace.

On Saturday, I had to drain our big bathtub (the garage), and let it dry out before putting foam panels back down. I also started to lay 1" foam panels on the garage floor, to prepare for pouring on Monday. I got to the site on Sunday, and all the panels I placed in the basement were blown all over the place. We had a bit of a wind storm with 55 mph winds. It took me all day Sunday to get the basement floor half covered with insulation panels. Dad came and helped me with the garage. 74 years old, and he had no problem crawling around with me down there. He complained that I didn't call him earlier so he could have shanghai'd my elderly uncle Roger to help as well.


On Monday, we got the basement and workshop floors poured. Despite having to complete the insulation that took me all day Sunday to get half-finished, it only took them about two hours. Here they are just finishing up the floor: 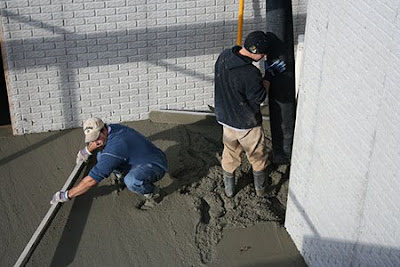 And here's the poured floor just before they finished it (with steel trowels). Notice the decorative rocks holding down the foam panels on the garage floor (those little bumps on the pink panels at the top of the picture). Take my word for it, after having to first fish the panels out of the garage bathtub, and then chase them through the prairie behind the house, the rocks are not decorative: 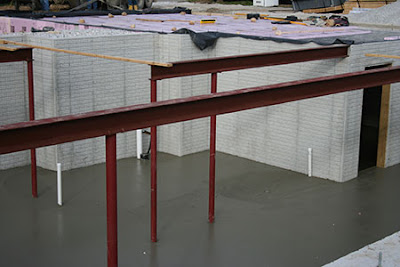 They couldn't pour the garage slab--another weather delay. To top off the rain on Friday and wind on Sunday, we're getting lows in the 20's and highs of about 40 for the next couple of days. Not a real problem for the basement floor, but definitely not good for a concrete slab poured in mid air. So they'll pour the garage and front porch slab on Thursday. 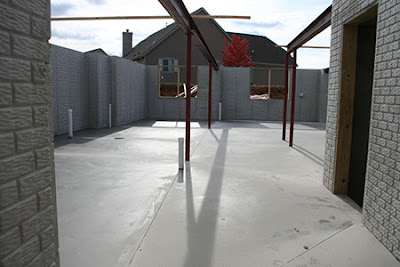 Now for the big finale: framing has commenced! The framers started today. They brought a forklift to disassemble the big pile of lumber and distribute it around the yard. They also laid out the sills. Tomorrow they'll work on the first floor. Hopefully by Thursday, they'll have the first floor capped and start on the first floor walls. 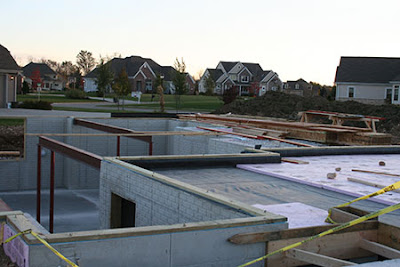 It's great actually seeing the house starting to go up. It is now officially an inch and a half high (the thickness of the sill). For the next few weeks, I'll measure progress by height. Stay tuned for more harrowing tales.
Posted by Unknown at 9:17 PM No comments: