After that rainy week last week, I ended the week by doing some cleanup and starting to do some caulking. And we haven't gotten any rain since (knock on OSB), although we did get a little bit of snow yesterday. When I got to the site yesterday, the roof trusses had already been delivered: 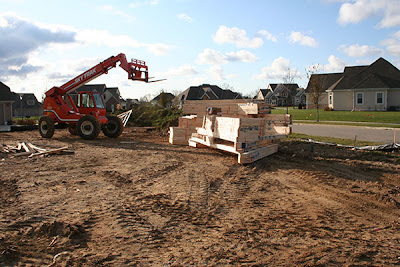 That's our roof sitting there. This morning, I got to the site at about 8:00, the crane was there, and they had already raised the first gable: 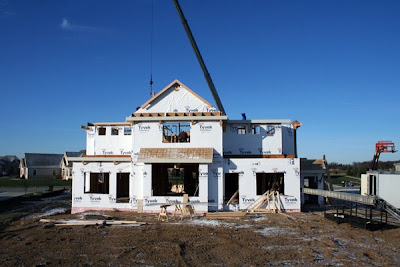 A beautiful blue sky, with the temperature at about 19 degrees. You can see a little bit of snow that fell yesterday. And a lot less wind than there was yesterday. But the biggest thing to notice is obvious: it no longer looks like a taco bell, it's finally starting to look like a house!
The framing crew got a lot of work done today. They raised about 95% of the trusses, five out of six gables, and even started sheathing the roof. And I stood there and took about 30 pictures. So here goes.
Watching the trusses get placed was great. Two or three guys standing on the second floor walls, one guy controlling the crane, and another guiding the truss into the right location. 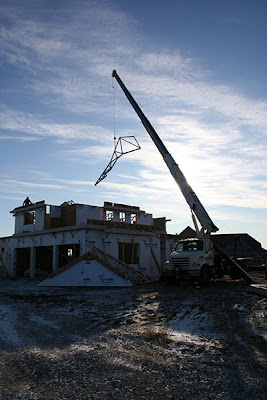 That funny looking truss is part of our roof. Actually, it serves as a girder truss, taking the load from other, more visible parts of the roof. I'm amazed at how precise these guys can be with these huge trusses: they place them within an 1/8 of an inch of where the plan says they're supposed to go.
In the next picture, they just finished placing that girder truss: 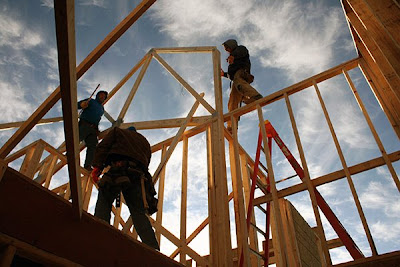 One more picture from a funky angle. This time, it's Tim, the lead carpenter positioning one of the trusses for placement. 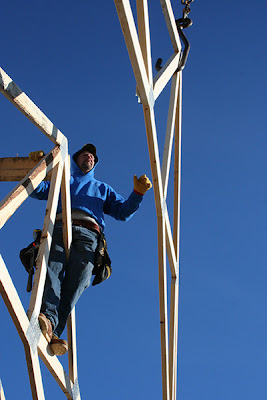 The crane sure comes in handy. Here's the crane lifting the south gable into place: 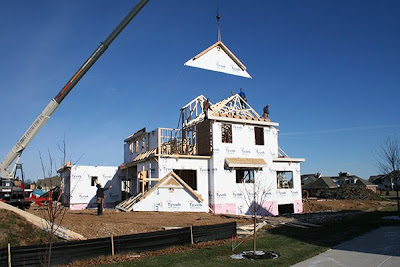 I guess it's pretty important to keep the crane level. Here it sits with its wheels off the ground: 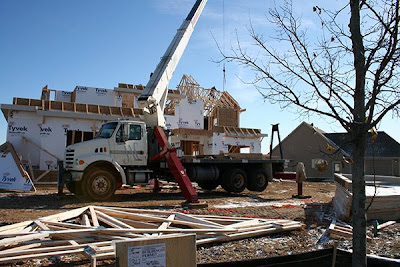 While the trusses were being installed, the gas company showed up to connect the gas. So we now have a gas meter. I'm ready to turn the furnace on, but I guess we'll need a furnace first. 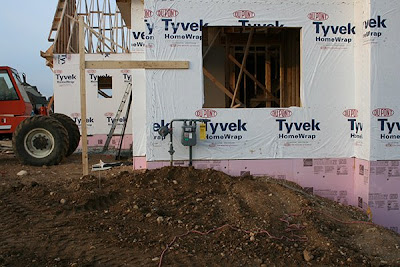 They finished with the crane around noon, having lifted most of the trusses into place. When I got there in the afternoon. Here's what it looked like from the front of the house: 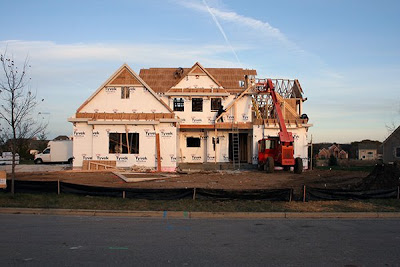 You can see they started sheating the front roof. There will be one more gable to the right. They ran out of 2x6s, so they couldn't finish building that last gable. They'll get a delivery from the lumberyard in the morning and should be able to finish it then.
Here's the southwest corner of the house: 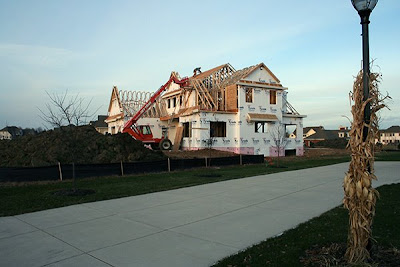 And the northwest corner. This is the elevation we were most worried about. I think I posted this concern in one of the earlier blog entries: it's hard to make a garage wall look good. I think Kerry did a good job with the design: 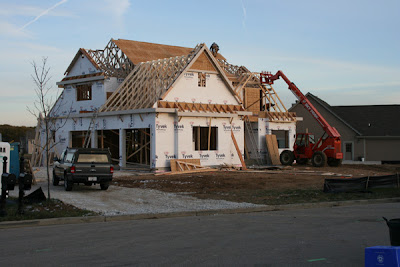 And finally, one of the other things we were worried about was that we didn't want the house to look too big. Here's a picture of the back of the house from near our neighbor's house to the southeast. I think it looks fine. It really doesn't look much taller than either of the ranch houses on either side. I think it even looks smaller (but Megan doesn't agree): 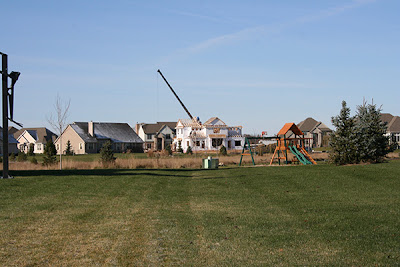 Tomorrow, they'll hopefully finish up that last gable, and get more sheathing done. So I'll have even more pictures. Unfortunately, it's supposed to be windy tomorrow. I sure hope the wind doesn't wreak havoc with the roof (knock on OSB, again).
Posted by Unknown at 9:42 PM No comments: