The building permit was supposed to be ready on Friday morning. I didn't get a call, so I called the building inspector this morning: "Permits aren't ready yet. I'll get to them in about 10 minutes and call you back in an hour".

Four hours later, still no call. Hopefully tomorrow. I can't bug him too much. No sense getting the building inspector pissed at me before I even start building. In the meantime, I verified that the excavator is ready to erect the silt fence and scrape topsoil on Wednesday. I know, that's just over a day away, and I still don't have a building or ground disturbance permit. He's ready. I'm not. Hopefully tomorrow. 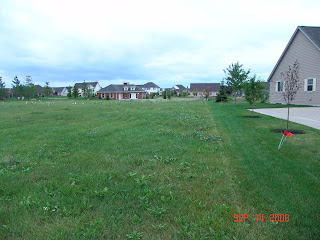 Dad drove out to the lot yesterday with Roger and I to get a "before" picture of the lot. So here's a picture of the house. It looks kind of bare. Of course it does--the house doesn't exist yet. (The house at the right of the picture is my next door neighbor's).


That brick building behind the lot is a water pumping station for the village. It's the reason we got our lot a little cheaper than the lot down the street. Megan and I talked about building a red brick house so that when people came over we could tell them it was our "guest" house. Nobody would have believed us anyway. If you look closely at the picture, you might be able to see that the lot is staked out for our non-brick house.

I'm continuing to shop, even though the quotes were finalized (for budget purposes anyway) last week. I found a special at Lowes on Saturday. Twenty percent off special order windows and doors. Even though I'm a little nervous about spending that much at Lowes, it will save us a bunch of money. So we can spend it on something else. We'll probably upgrade the furnace to a more efficient model for about $1000, and maybe even the interior doors from maple to cherry for another $1000. Maybe. There goes the window savings.

Look for more tomorrow.
Posted by Unknown at 11:34 PM No comments: