First floor is all framed

But there were also some unavoidable delays. The roof trusses, which I had hoped would be ready Tuesday, won't be delivered until Friday. That moves everything out by about a week. The windows won't be delivered until December 1st. But I did order the thin stone veneer for the front of the house to get delivered next week, so I'll be able to get a head start on that. I'll be setting the stone myself, so I'll finally be able to do something concrete (no pun intended).

We've had some weather delays, but not too bad yet. Just a day or two. The biggest delay is the roof trusses. Tim, the framer, waited until after we had garage walls up to verify the truss measurements. It was necessary because the foundation walls in the basement were poured out of square. He wanted to be sure that he could correct that error without having to increase the size of the trusses. He could. Luckily, I spec'd energy heels on the trusses, and I have 2x6 walls, so we have some room to play. They'll just have to shim the siding when they install it so it lines up with the foundation below.

The second delay was around the windows. I called in a change to Pella to increase the size of the basement windows and to upgrade the doors to use decorative glass. The sales rep told me I called the change in just in time. But then somebody from Pella called me and told me I missed the deadline and they were going to charge me a 50% restocking fee for the door (about $1000). It also delayed the whole window order by 10 days. I'm fighting the extra charge. But I'm not worried about the delay--it will allow me time to get the roof on before the windows are delivered. Since the windows are a "finish" item, it will be much better if I don't get them wet. 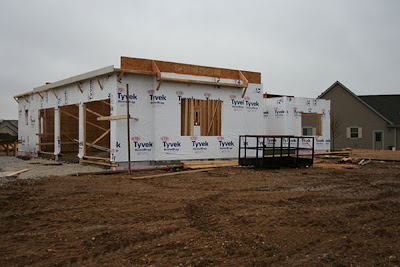 Here's a view from the inside. Looks like we'll have enough room for all of our junk, and maybe even be able to park one of the cars here: 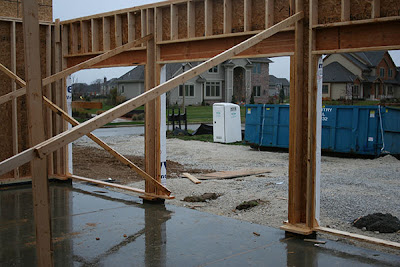 The second floor joists and subfloor are up (for the most part): 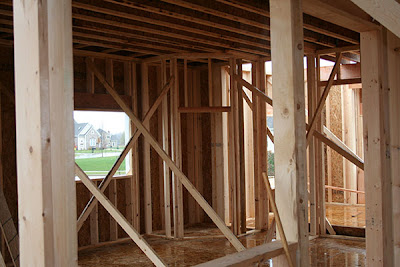 And they've started on the second floor walls: 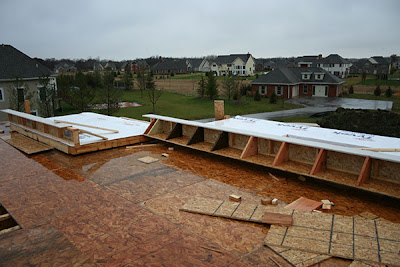 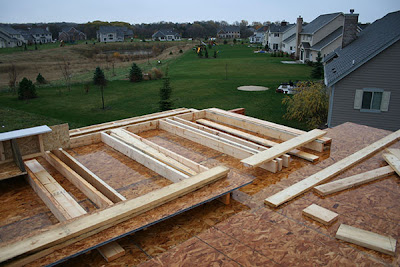 A view of the stairs from the second floor: 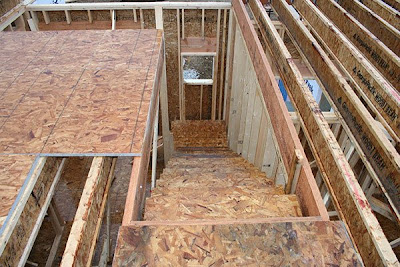 I was hoping that we'd be able to get all the way to the roof without any rain. That sure didn't happen. We got hit with the same storm that dumped four feet of snow on South Dakota in the last couple of days. Although by the time it got to us, it was mostly rain. So everything has been washed clean of sawdust, even the basement floor: 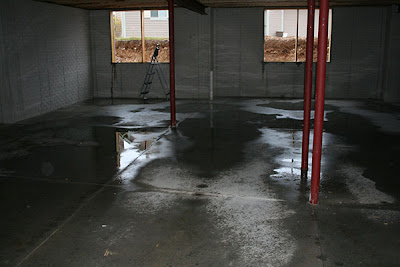 Despite the rain, they did get a start on the workshop stairs: 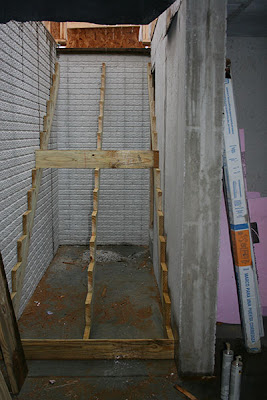 I'm buying a moisture meter from Woodcraft this morning. I want to be sure things are dry enough before we put the insulation and drywall up.

Finally, here's a picture of the Northeast corner of the house that shows we are actually closed in on all four sides 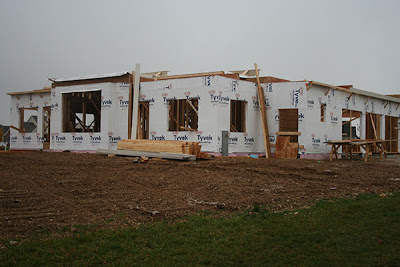 This weekend, I'll do some cleanup. Next week the framers will finish with the second floor walls, and hopefully get started on the roof on Friday.
Posted by Unknown at 7:54 AM No comments: