We have a basement

We're no longer just proud hole owners. We now have a basement in our hole. The crew came back today to strip the forms from the walls, apply waterproofing membrane and insulation, and backfill with a couple feet of gravel. I stopped by the site for a little while this morning, went to work, and here's what I saw when I returned in the afternoon: 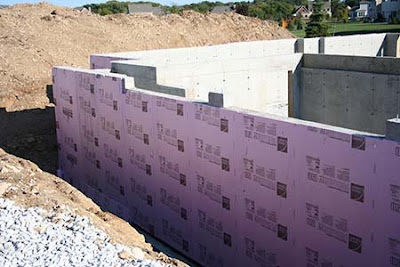 The crew had finished stripping the forms and applying the insulation and waterproofing membrane. We're using a product called Platon from Certainteed to waterproof the basement. It's a dimpled sheet of thick plastic (24mils--about 4 times as thick as a contractor's trash bag) that prevents water from reaching the walls. Since it's dimpled, there's some air space behind the membrane that allows water vapor out of the cement and/or any water that finds its way behind the membrane to drain. It's fairly new here in the U.S., but they've been using something similar in Europe for several years. I think it's a much better choice than the tar paint or rubber membranes that are more common because it provides both waterproofing and drainage. Only time will tell.
The Platon membrane is covered with rigid foam insulation (1-inch, R5 insulation panels). I found out today that Wisconsin's Focus on Energy program will give me a rebate if I install 2-inch insulation panels (I found that out right after the 1-inch panels were installed, of course). I guess I'll have to head to the building supply store to get another inch of insulation before the full backfill next Thursday. Once I've applied 2 inches of foam, the basement will have R10 insulation outside the wall. When I finish the basement, I'll add another 2 inches of foam to the interior, giving me a total of R20 insulation on the basement walls (about the same as the first and second story walls). Since something like 30% of the heat lost in a house is lost through the basement, this should make a big difference in the heating bill.
Now back to the story. Shortly after I returned to the site, the conveyer showed up, followed by a dump truck with a load of gravel: 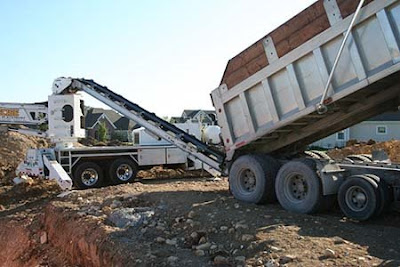 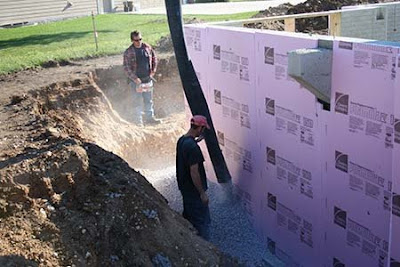 Once the backfilling was complete, I climbed in to the basement for the first time. It's great to see the house taking shape, but I certainly can't complain that it's taking a long time. We hadn't even broken ground 10 days ago, and now we have a basement. Here's a view of the southeast corner of the basement. It will someday house a bedroom and/or exercise room to the far left, and a rec room to the far right, a bathroom, and a furnace room: 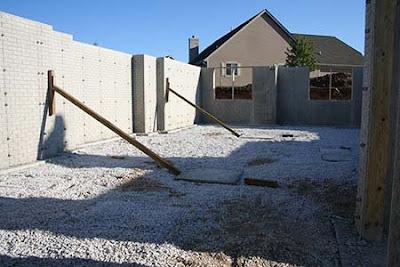 Notice the windows. I'm going to try to make them as tall as possible to let in as much light as I can. Being on the south wall, the windows should make the basement reasonably bright. The northwest corner of the basement will serve as a theater room (we actually removed a window from earlier plans so it would work better as a theater): 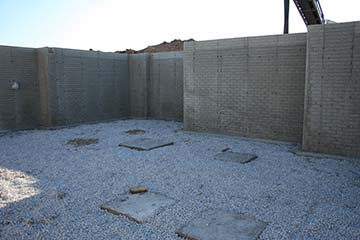 And finally, the real reason we're building the house. My workshop: 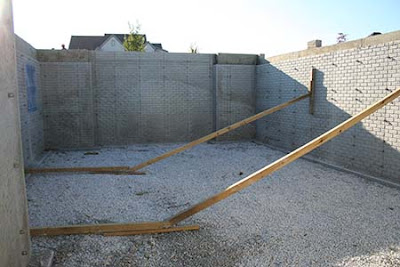 The braces are a precaution to keep the wall from caving in when it's backfilled. They'll be removed after backfilling is complete (next Thursday), the steel is set (next Friday), the basement is capped with the first floor framing (probably a week from Thursday), and the workshop is capped with Spancrete panels (another week after that). Then the basement floor can be poured and the basement will be pretty much done. At least until I start finishing it.

That's about it for this week. We'll continue to collect rocks over the weekend, but for the next five or six days, we get to experience the excitement of waiting for cement to cure.
Posted by Unknown at 11:19 PM No comments:

The foundation is in

Before the foundation crew finished up on Wednesday, they did a quick check for level with a laser level at each corner. Each one was right on. And they hadn't leveled or squared the forms yet. As I understand it, you're really looking for three things in a basement wall system: strong, square, and level. I guess I'd add fourth that's at least as important: accurate. It's pretty amazing how this guys can set up a bunch of 2' x 9' and 2' x 10' forms, fill them with concrete, and have everything come within a fraction of an inch of the plan.

Anyway, the crew spent the first couple hours on Thursday squaring and leveling the forms. They didn't have any trouble getting things level. Great job by the excavator and footing guy.
When they squared it, there was only one problem area: at the front of the garage, where they had trouble getting everything perfectly square with the 10 foot tall forms for 12" thick walls. I believe they got it close, but the carpenter will have to tell me how well they really did. I hope they did well. Unlike the software I'm used to making, there's really no easy way to go back and fix problems with the foundation.

Anyway, when I got to the site, the forms were already squared and leveled, and the conveyer was ready to start. 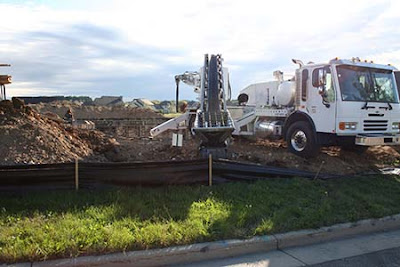 The conveyer takes concrete from the cement truck, and spits it out where it's needed. It's a bigger machine than it appears to be in the picture above. This picture starts to put in into perspective. The boom has got to be at least 40 or 50 feet long: 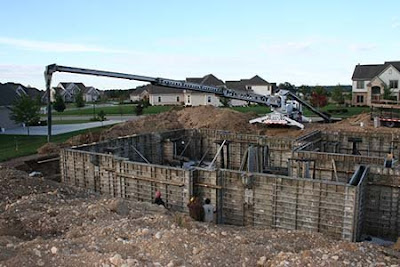 At 8:55AM (5 minutes before schedule), the cement trucks started pouring in (pun intended): 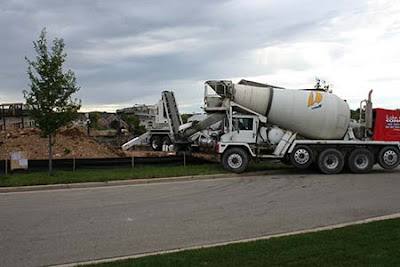 and started pouring the cement: 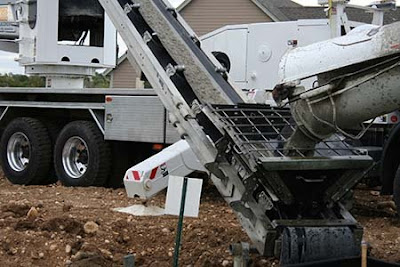 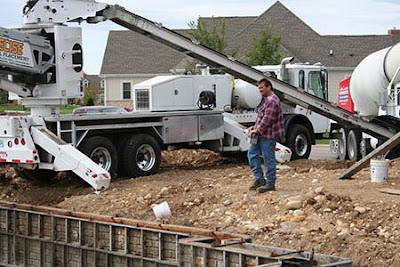 The conveyer acts like a vacuum cleaner in reverse, spitting out the concrete through a hose. One crew member guides the hose, directing the concrete between the forms, while others agitate the poured concrete to eliminate air pockets: 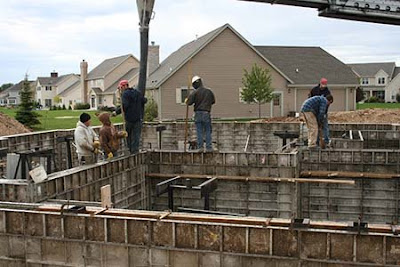 After the concrete is poured, the crew levels it off, trowels it smooth, and embeds bolts into the concrete that will secure the stick walls to the foundation: 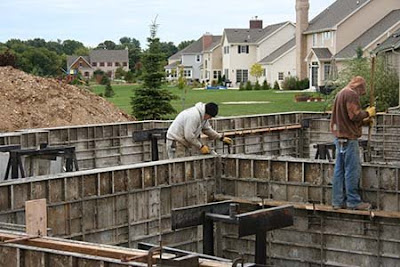 There were probably at least 15 loads, but I lost count. There were as many as three cement trucks on site at a time. It only took about two hours to pour the concrete. Each truck emptied itself in less than 10 minutes, and there weren't any delays longer than a couple minutes. By about 11:00, the walls were done.

It's been a busy week. So I'll add a couple posts tonight that I should have been entering during the week. A lot has happened.

On Monday, 9/29, the excavator, BPX from Pewaukee, finished excavation. They did a great job, and they were even complimented by the footing guy. You can't get any better than that. The foundation guys, Precise Poured Foundations, based in Brookfield, started the foundation by starting to set footing forms on Monday, and they finished them up on Tuesday, got the footings inspected successfully, and poured the footings by the end of the day.


Here's a picture of the completed footings, with forms for the walls stacked up ready to install on Wednesday: 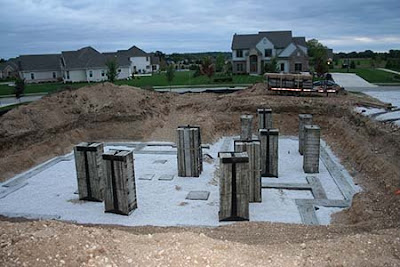 We're using the Form-A-Drain system from Certainteed for our footing forms. The hollow forms are made of rectangular tubes of recycled plastic with performations on the outer side that allow water to be channeled through the forms and into the sump crock. So the forms also serve as an interior and exterior perimeter drain. Pretty cool idea.

On Wednesday, they started to setup forms for the basement walls at 7am, and by about 8:30 they had already made some good progress: 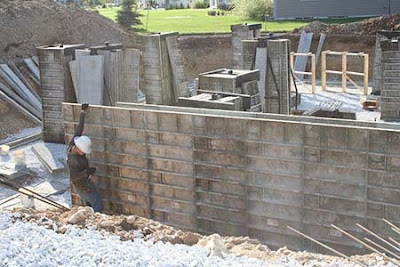 And by the end of the day, the forms were complete, with rebar set to strengthen the walls, pockets for the steel beams we'll use to support the first floor, and ledges to support the Spancrete floor in the garage and the stone veneer on the front of the house: 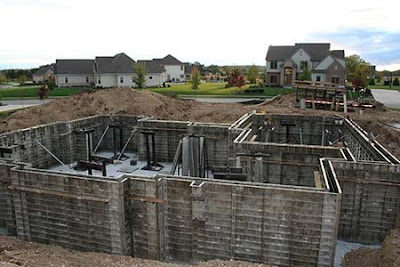 I stuck around to get a couple more loads of field stone that we hope to use for retaining walls. It turns out that we live on a big gravel pit. Below the topsoil, it's a mix of sand and rocks. Shouldn't have any trouble with water in the basement. Here are the treasures I've found so far: 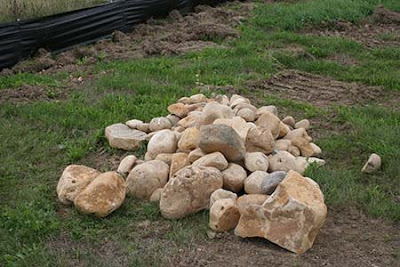 It's mostly Lannon stone (local limestone), with some granite mixed in. This pile doesn't look like much, but I have many more loads to go. And take my word for it, these are some heavy rocks. As I was getting ready to leave, I realized I hadn't taken a picture of the whole foundation, and what did I find? Look closely, and you'll see that our basement is at the end of the rainbow! I checked all over, but I couldn't find the pot of gold. Maybe it's a sign that I'll need a pot of gold to finish the project?
Posted by Unknown at 9:45 PM No comments: