Now I have a workshop...almost

Another slow week. At least it started out that way. The Spancrete panels that we'll use as our garage floor and workshop ceiling were done right on time, and were ready to install on Thursday. But the steel guy was supposed to be there on Thursday morning to set steel beams and columns that will support the first floor. So I rescheduled the Spancrete installation for Friday.

I showed up at the site on Thursday morning and waited, and waited, and waited. Finally, I received a call: they forgot to attach a splice needed to connect two of the beams, so they couldn't install until Friday morning. So that would mean I would have three things going on at the same time: Spancrete, steel, and underground plumbing. I figured it probably wasn't a good idea to have the plumbers crawling around under tons of swinging steel and concrete, so I rescheduled them for next Tuesday. 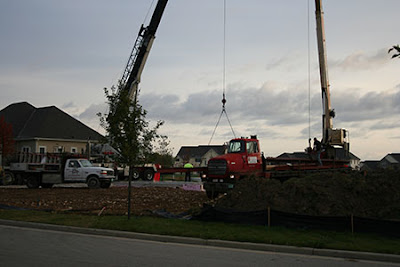 Not one, but two cranes. One for the steel, one for the Spancrete. And both teams were working at the same time. The Spancrete crane was pretty big. I guess that was necessary to swing those 25'x2'x8" concrete panels and set them on the walls: 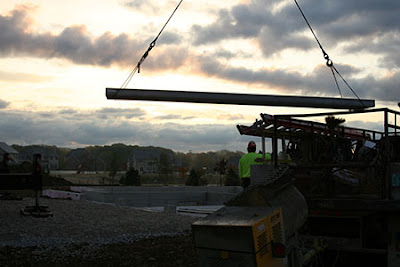 One guy operated the crane, and two guys guided the plank into place: 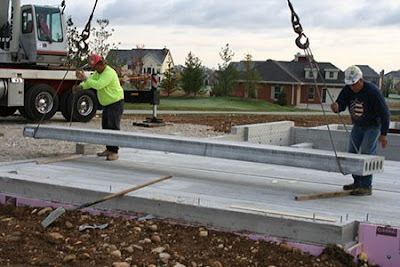 At the same time, the steel guys were placing the steel the same way: 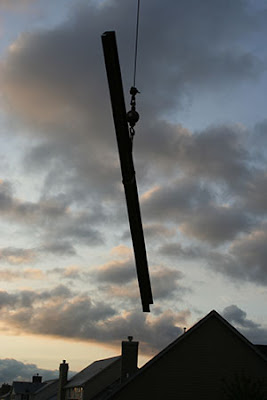 But it was obviously a bit lighter, they only needed one guy to set the steel: 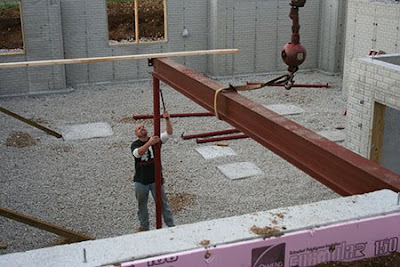 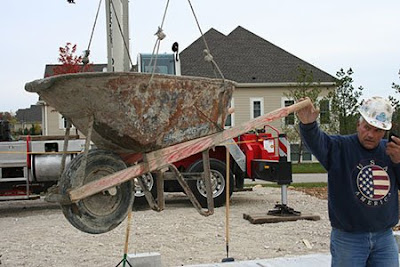 Now that's what I call ingenuity. Lifting with a crane sure beats pushing a hundred pounds of mortar around on loose fill in a wheelbarrow.

So now we have a subfloor for the garage: 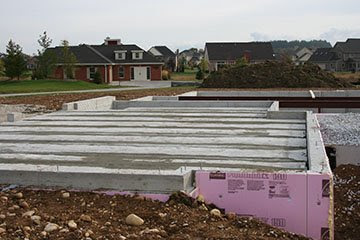 Steel beams to hold up the first floor: 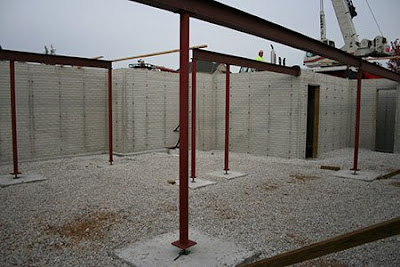 And, most importantly, the beginnings of a workshop: 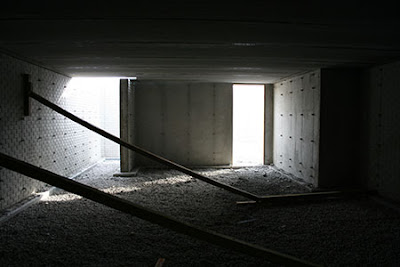 What's in line for next week? The roofers will lay a rubber membrane over the spancrete panels on Monday. The plumber does the underground plumbing on Tuesday (and hopefully, the inspector passes us on Tuesday). Our framer will adjust the columns and beams while the foundation guy is preparing to pour slabs in the basement, workshop, and garage on Wednesday. Lumber gets delivered on Thursday. And framing will start the next week!
Posted by Unknown at 11:27 PM No comments: