Just waiting for the roof

The framers pretty much finished the second floor walls, added soffits on the first floor in the kitchen and laundry room. They also lowered the ceiling in the front hallway. So they're essentially finished until the trusses--which were delayed by another day--are delivered on Monday.


This weekend, I'll start caulking. I'll be filling every gap I can find in the framing, making sure that I eliminate every air gap that I can even before the insulation goes in. We'll also try to figure out how we're going to store the interior doors. We got a good price on flat panel cherry doors made by the Wausau Door Company here in Wisconsin. We'll use five panel doors that are similar to those on our old house. We ordered them from Home Depot, hoping it would take them a while longer to get them to us.


They arrived yesterday--two weeks ahead of schedule. We could store them in the workshop, but it's still pretty wet down there--the slabs above and below are still drying out. So we'll have to find a conditioned storage unit to store them in for a month or two.


I'll be glad when the house is fully enclosed with a roof, windows, exterior doors, etc. But that's still a few weeks off. It's been raining pretty consistently: every day for the last week. When I checked things with a moisture meter last weekend, the walls were pretty good--about 10% to 12% moisture content. The subfloors? Not so good. They soak up water like a sponge, so they are at 25% and up. The ideal here in the winter is 7%. If things are much wetter than that, I'll risk cracks in the drywall and cupped floors. So it looks like I'll have to get the heat turned on as soon as I can just to start drying things out before the insulation goes in.


Next week will hopefully be much better in terms of weather. Not much rain expected, just a little bit of snow early in the week. By this time next week, the roof should be framed. Roofers should be able to start late next week or early the week after, along with the mechanicals.


The power company was out to mark for the gas line and to install the electric meter today. Hopefully, they'll start digging for the lines tomorrow. But with my luck, they'll arrive at the same time as the trusses or the crane early next week.


Here are a few new pictures. Here's how the front of the house looks. The walls that look incomplete on the right side second floor are actually interior walls. The trusses have to go in before they can finish the exterior: 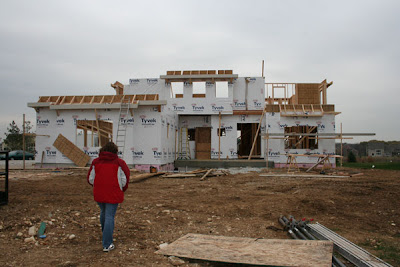 Here's another view from the northwest corner that shows the garage: 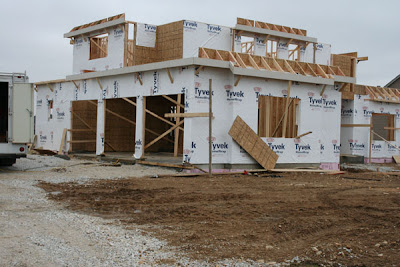 The second floor interior walls are done too. We showed Zeke his new bedroom for the first time. Here's one with Linda's room at the front, Zeke's room on the right side, and Danny's room on the left: 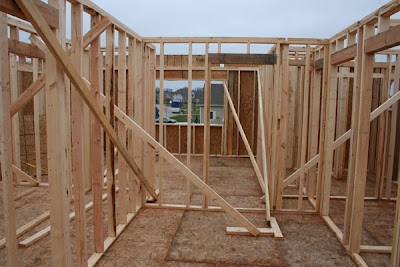 Posted by Unknown at 9:16 PM No comments: