It's been two weeks since my last update. We've been busy with my daughter Linda's graduation from UW-Milwaukee, my dad's stint in the hospital (he'll be alright), about 8 snow storms leading to one the most snowy Decembers we've ever had, and Christmas preparations. In those two weeks, work on the house has progressed a little slower than I'd like, mainly because of the weather. The framers are still working on another job (the weather delayed them by at least a week) so the siding hasn't started yet. HVAC and electrical were both delayed by multiple snow and cold days.
So what's been done? Most importantly, I have a working workshop now. The framers finished furring out the walls, the electrician is done with the rough wiring, I have lights, and even a working Modine furnace dedicated to the shop: 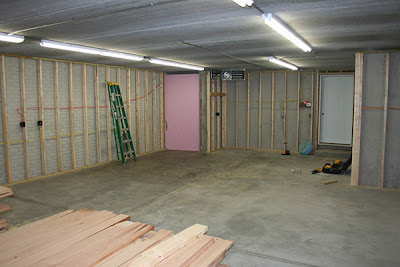 My son Danny and I stopped by the house tonight, and the furnace has raised the temperature of the workshop to 45 degrees (where we had it set), and it takes about 5 minutes to raise the temperature by a degree. We still have to put some more insulation in the walls (more than the R-5 that's already installed on the outside foundation walls) and seal up the stairwell before I turn the heat up much higher.
You might have noticed the stack of lumber in the picture above. Here's a better view: 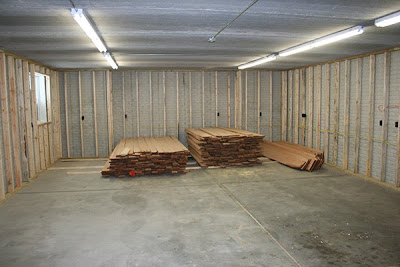 That's 2500 board feet of Wisconsin black cherry. I got a good deal from a local sawmill, who delivered it last weekend after straight-line ripping one edge and planing each board down to 15/16". The quality was better and the price was cheaper than I got when doing my kitchen in the last house seven years ago. I was worried about getting it unloaded from the truck, but Danny and I, with help from my nephews Jake and Joe, worked with the sawmill owner. It only took the five of us about an hour and a half to get it off the truck, down the stairs, and stacked in the workshop.
Like I said in the last post, the plumber is finished with the rough plumbing, and we passed the plumbing inspection. The hvac guys have taken quite a bit longer, but they're done now as well, and I think we passed the hvac inspection. Here's the furnace and HRV installed: 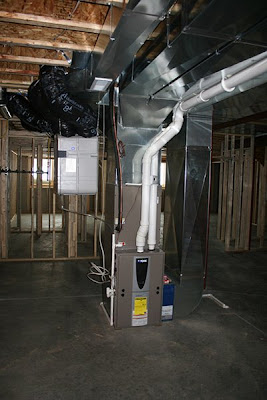 I chose a York furnace, manufactured by Johnson Controls which is based here in Wisconsin. It's a modulating furnace, which means that both the blower and the gas flame are variable. It can start out at low speed and low flame when demand is low, and increase both as needed when demand increases. They set it up as a zoned system, with one zone for each floor. Most importantly, it's extremely efficient: 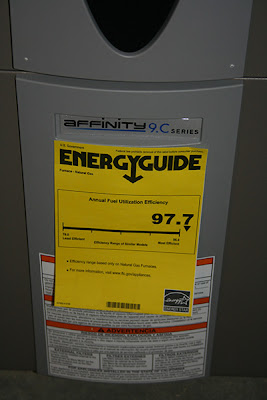 It's supposedly the most efficient furnace on the market today. Since geothermal was too expensive to consider, I figured we should concentrate on getting an efficient furnace instead. We'll see how it impacts the gas bills.
I have to give the hvac guys some credit. They did a good job keeping the ductwork in the joist bays: 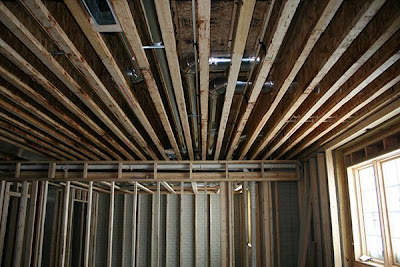 Since we're finishing the basement eventually, I want as much ceiling height as possible down there. So the theater and rec room will have 8'-7" ceilings--with no need to work around the duct work. In the bedroom, the ceiling drops to 7'-10" to accommodate the furnace plenum.
As you can see, the basement is all framed now, and the ceiling will look great: 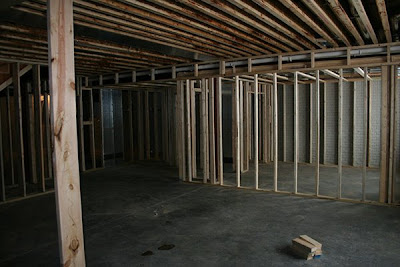 The framers were able to follow the plans pretty closely. We'll have a rec room (with room for a pool table), a theater room, a bedroom/exercise room, and a full bathroom. I figured that as long as the framers were around, I should take advantage and get them to frame in the basement. They did a much better job than I could have, much quicker.
The electricians did get started late last week, as soon as the plumbing and ductwork were far enough along. They've still got about a week of work left to do, but I'll be able to get started on structured wiring tomorrow.
Even though we lost a week due to weather, I put a week of slack in around the holidays. So as soon as the electrician is done and we pass the electrical and framing inspections, the insulators can start. I'm hoping for insulation to start on Jan 5th.
We hit the 90-day point on Dec 23. When I look back at the original schedule, it isn't too bad. we can still hit our projected move-in date of the first week of May.
Posted by Unknown at 9:27 PM